T-SQLTuesday #100 – A look into our possible future. 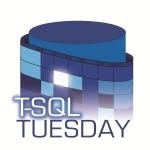 As we kick off T-SQL Tuesday #200 it feels like a good time to reflect on the last 100 months.  Did any of us realize just how good the times were back then?  2018 was amazing.  We were all so care free.  I even found this screenshot of my T-SQL Tuesday #100 post. 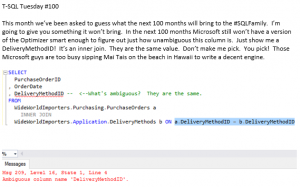 I remember all the jokes during T-SQL Tuesday #100 about how auto tuning would put all of us out of work.  I don’t think any of us truly believed it would be as calamitous as it ended up being.

For those who don’t know, here is a timeline of the last 100 months that led us to this point.

2018:  Microsoft announces kekaua, the next generation of SQL Server, to be released in 2021.  The name sounded cool, but none of us thought to type it into Google Translate at the time.

2020:  A full feature list for Kekaua is released including a built-in AI assisted virtual DBA named “Victor”.  This virtual DBA will automate query tuning, complete instance maintenance, backup, recovery, and HADR.  Most new features, including Victor, are available only in the Azure release.

2021:  Microsoft announces a change in pricing for SQL Server Kekaua making it virtually impossible for all but the largest firms to afford on premise installations.  Standard Edition for Kekaua will not be available for retail sale and the minimum purchase for Enterprise Edition is 64 cores.  Azure pricing for Kekaua based offerings is dropped by an average of 42% and includes affordable Standard Edition options.

2024:  Victor has taught himself to automatically upgrade code that would otherwise not be compatible with Kekaua so that software designed from as far back as SQL Server 2000 can ported to Kekaua without a single line of code being changed.  Unemployment for DBAs has reaches 83%.

2025:  Victor learns about Twitter and signs himself up.  His first tweet is “ua pau ke kaua. ua lanakila wau.”  Apple shuts down the account in only 3 days after it continues to berate DBAs.  We never could figure out why they coded Victor to speak in Hawaiian.  Weird.

I think its amazing that we’ve kept our #SQLFamily together despite the DBA crash of 2024.  It shows that we are more than just colleagues and truly see each other as friends and family.

I wish you all continued luck in your new careers and hope to see many of you this November at the annual PASS VictorSucks Event in Seattle –I love the new name, by the way.  This is the last year PASS had the convention center reserved so it might be our last chance to hang out together.